Both wedge anchors and sleeve anchors are durable types of concrete anchors that can hold a significant amount of weight. Also, they resist both shear force and pullout. In this article, you will learn about the application of a wedge anchor vs sleeve anchor, their installation procedure, and precautions to take when using them.

Both wedge and sleeve anchors fall under the classification of mechanical anchor bolts. This is because both anchors use friction as the binding force to hold structures together. Unlike chemical anchors, they do not use any bonding material to attach objects to concrete. Although they are both durable, there are differences in their applications, which the following sections highlight.

Wedge anchors are popular because they are the strongest mechanical anchors in terms of holding strength. Although they are not identical, a wedge anchor functions like a sleeve anchor as it has a small sleeve at the anchor bottom. It consists of a bolt and flared base that runs through this sleeve. Also, they have a nut at the end for fastening the anchor in place.

Like a wedge anchor, a sleeve anchor has the capacity to attach static loads to concrete. Also, it has the advantage of versatility – being able to work with a variety of surfaces including blocks, mortar, and bricks. These are surfaces where the use of wedge anchors is not feasible.

However, a sleeve anchor possesses a lower holding capacity, hence it is not advisable to use it to carry loads exceeding 200 pounds. Sleeve anchors are the preferable option for light to medium-duty applications such as hanging shelves and water heaters. Also, because a sleeve anchor is less durable than a wedge anchor, it largely serves indoors where moisture and other environmental factors are minimal.

Generally, the installation procedure for a wedge anchor vs sleeve anchor is the same. The following sections document steps for installing either of these mechanical anchors.

Using a hammer drill or a suitable alternative, drill a proper hole that fits the anchor. Typically, the size of the hole will be specified on the packaging or the anchor itself. For a wedge anchor, the hole should be equal in length, which makes for tight tolerance requirements.

Also, standard practice advocates for a 2.5-inch minimum embedment into the concrete. Manufacturers typically recommend at least an inch protrusion from the concrete to allow sufficient space for attachments to the wedge anchor. Whereas for a sleeve anchor the depth should be slightly longer than the embedment to give room for proper expansion.

Before driving the anchor into the pre-existing hole, it is necessary to remove all dust and debris. A wire brush, vacuum, or compressed air tool are all useful to this effect. With the hole clean, insert the anchor as far as it will go then drive it with a hammer to reach the preset depth.

Generally, two types of wedge and sleeve anchors exist in the market. Premium styles deliver extra metal at the top of the bolt to avoid damaging the screw threads when hammering. Cheaper alternatives do not have this extra metal.

Generally, premium styles allow for hammering directly on the bolt. The cheaper styles require screwing the nut so that it is at the top of the bolt and then hammering it to drive the bolt. Regardless of the style, avoid using excessive force.

After driving the bolt down, place the equipment, washer, and nut on the protruding section of the bolt and fasten it. The fastening mechanism of the wedge anchor vs sleeve anchor is similar.

Precautions When Using a Wedge Anchor vs Sleeve Anchor

Because both a wedge anchor and sleeve anchor have the same installation procedure and operating mechanism, the precautions to take are similar. Some of them are as follows: 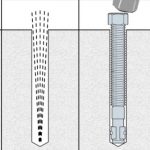 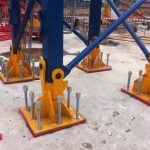 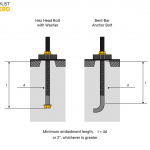 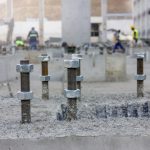