What is Fatigue Failure?

Once a material deforms plastically, it cannot go back to its original form. Plastic deformation occurs right before the fracture of a material and is a result of prolonged fatigue. As a material deforms plastically, microscopic cracks propagate and connect causing failure in the material. The time to failure depends on the load, intensity, and type of stress on the material. It is important to understand the way that cracks propagate as failure may be catastrophic to any types of industrial application. Because of this, better design against crack propagation requires understanding of fatigue failure. It is important to test a material to identify its endurance limit before considering it as a building material.

At the microscopic level, the cyclic stress on a material propagates microscopic cracks which connect as the stress continues. Typically, the cracks propagate at sharper corners, knobs, and other harder to see areas. Because of this, lot of cracks that propagate in real world applications are often very hard to see. An example of fatigue based failure is the repeated cyclic load on a crankshaft in a car engine. Because of the cyclic nature of combustion engines, shear stress may cause fatigue failure which would be catastrophic in the operation of a car. Because of this, many design considerations have been made to prevent failure in the modern designs of crank shafts.

Fatigue failure follows three major steps to failure. The first step is the initiation process. Initiation is when irreversible, plastic changes occur in the material. The origination of the initiation is microscopic and failure never occurs too far from it. The initiation phase is the most studied as preventing initiation altogether helps remove the possibility of failure out of design.

Propagation is the second step in fatigue failure and is when the microscopic cracks begin to grow. This stage of fatigue failure is when failure may most easily be identified. The physically aspects of the crack begin to express themselves as the material is in its early stages of failure.

The final stage of fatigue failure if the rupture of the growing cracks. Once all the microscopic cracks have expressed themselves and connected, the material breaks. The fracture occurs in many different ways depending on the type of stress and load the material is put under.

Types of Fatigue Failure and Examples

There are two main types of fatigue failures: mechanical fatigue and thermal fatigue.

Mechanical fatigue identifies sources of fatigue that develop as a result of physical stresses on a mechanism. This may be from any type of action that occurs on a component.

Vibration fatigue is a form of mechanical fatigue and is induced by vibration. It typically occurs when loading a component outside its intended design. Similarly, vibration fatigue may also occur as a result of improper damping. If held too stiff, cyclic vibrations will cause crack propagation in a material such as a shaft. A real world example of vibration fatigue is the vibration at a nozzle on a pressure vessel. As the nozzle on a system experiences fluctuating fluid pressure, the stress may cause for cracking in the welds used to hold them in place. As a result, the nozzle welds may fail and cause catastrophic damage to a system.

Corrosion fatigue is another form of mechanical failure and occurs as a result of corrosive elements on a material. Once a material becomes corroded, it weakens from its initial state making it susceptible to crack development and propagation. Coating against any corrosive substances when designing is an important part of preventing against this type of fatigue failure. A real world example of corrosion fatigue is the De Havilland plane crashes of 1954. The plane fuselage was uncoated and lead to crack mitigation deep within the material. After continuous flights and cyclic stress to the fuselage, the crack grew and the material failed causing catastrophic failure of the plane.

With modern technology, identifying weak point susceptible to fatigue in many applications has become a viable way to prevent failure. For modes of failure such as corrosion fatigue, chemical coatings are good modern solutions to weaknesses in deisgn. However, for more physical modes of failure, such as vibration fatigue, modeling the design becomes important to know how to design against failure.

FEA or finite element analsysis softwares are computerized tools that may accuratley model how physical and thermal forces may affect a design. FEA tools from AUTOdesk and Solidworks allow users to input their design and materials to model the conditions the assembly experiences. The software models the identified factors and identifies any weak points in the design where failure may occur. 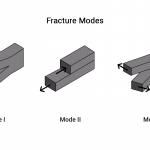 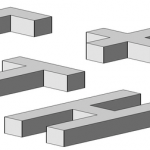 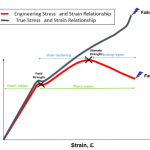 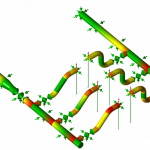